SAVE THE MULTIHALLE! designed by Frei Otto in Mannheim – Competition

SAVE THE MULTIHALLE! designed by Frei Otto in Mannheim – Competition

Save The Multihalle!, Designed By Frei Otto In Mannheim

Our team is excited to take part of a call for ideas to contribute to the preservation of the Multihalle designed by Frei Otto, and be part of the conversation regarding this work heritage and visionary architecture and structure. 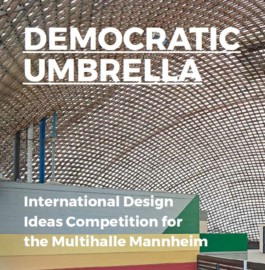 The Multihalle was built from 1974 to 1975 for the National Garden Show in Mannheim. It was predominantly planned and conceptualised by architect and posthumous Pritzker Prize winner Frei Otto, after a competition design draft by Carlfried Mutschler and his business partner Joachim Langner. The purpose of this competition is to continue the story of the Multihalle after its many years of obscurity. The Multihalle Mannheim e.V. Association, the Association of German Architects in Baden-Württemberg (BDA) and the International Building Exhibition Heidelberg are inviting submissions of ideas for the sustainable development of the Multihalle and, in close cooperation with the Baden-Württemberg Chamber of Architects and the City of Mannheim, hosting the “Multihalle –Democratic Umbrella” competition dedicated to this task.

Initially, the Multihalle was designed only as a temporary construction for the duration of the 1975 National Garden Show, yet it is still standing. Although the function hall has been closed for several years due to structural and building law reasons, the restaurant, in a separate part of the complex, is still in operation. In 1998, the Multihalle was declared a cultural monument and granted listed building status. Its future now depends on the ability to raise funds for its structural maintenance and find long-term prospects for use.

“Frei Otto is considered one of the most influential architects of the 20th century. Whilst his work is primarily characterised by constructive boldness and structural lightness, it equally stands for new dawnings, pluralism and freedom. The interplay of construction, poetry and visionary thinking is what makes his buildings so fascinating right up to the present day. Frei Otto was posthumously awarded the Pritzker Prize for Architecture for his life’s work, in 2015. One of Otto’s most significant buildings is based on a design by architect Carlfried Mutschler and his business partner Joachim Langner: the Multihalle in Mannheim’s Herzogenriedpark. Initially constructed as a temporary hall to accommodate plants at the 1975 National Garden Show in Mannheim, the world’s largest timber grid shell roof, with its spatial and architectural allure, is still regarded as a sign for a democratic move towards change – as a “huge festival that put our city on the map”, as a local resident and contemporary witness put it. Long after the National Garden Show had ended, the hall served as a prestigious venue for major political, media and commercial events. During the 1980s and ’90s it experienced a steady decline in appeal as its architectural structure could no longer satisfy the growing requirements of acoustics, fire protection and climatic comfort. Finally, structural problems and static deformations necessitated a partial closing of the hall, upon which the preservation of the entire construction was called into question. A broad and prominent circle of supporters formed in protest against this and, in 2017, a political decision was taken to renovate and reuse the Multihalle, thus opening a new chapter in its history. This competition is a further significant step. The outcomes should not only make it possible to preserve the Multihalle’s architectural structure, but also – and above all – to reinterpret and continue into the future Frei Otto's ideals, which are manifested in the building and had a major influence on its creation. The designs should take into account not only the urban landscape around the hall and its leisure uses, but also the social integration of the neighbouring districts and Mannheim's vibrant cultural scene.

Frei Otto's visionary concept for utilisation of the Multihalle is to be updated as an experimental urban laboratory and open space for an open society where Mannheim’s citizens can come together for sports, leisure and cultural activities, and to thereby establish the basis for a social laboratory in which pioneering methods and forms of urban coexistence can be developed and explored. The Multihalle’s roof construction should not only provide the necessary setting for this visionary use, but also symbolise the idea of a “Democratic Umbrella” in public perception through its iconographic architecture.

The objective of this competition is therefore to design new utilisation options for the Multihalle and to express these through its architecture. Future utilisations should comprise permanent and temporary elements and also offer usage options that build on the individual design idea – in the spirit of Frei Otto, Carlfried Mutschler and Joachim Langner, who already envisaged the social and architectural future from their contemporary viewpoint.”