THE WORK OF SERGIO MUSMECI LET AN UNPRECEDENTED HERITAGE: RESEARCH AND BUILT WORK FOR NEW FORMS OF STRUCTURES AND CONCRETE ARE CLEARLY AN IMPORTANT SOURCE OF INSPIRATION AT THE TIME OF CONTINUOUS NEW DIGITAL SIMULATION TOOLS.

“The work of the Italian engineer Sergio Musmeci (1926-1981) is based on the ideal of a harmonic relationship between structure and architectural form, which leads to an extensive search for an integral structural form. During the prospering years in postwar Italy and in the shadow of the prominent Italian engineers Pier Luigi Nervi and Riccardo Morandi, Musmeci researches concrete surface structures. He calls for new approaches to form finding, particularly in respect to moldable concrete: “The form is the unknown, not the inner stresses”.

Starting in the mid-1950s with first projects for thin, folded roof structures made of reinforced concrete, Musmeci is led by the idea of geometrical surfaces. At the same time he begins to experiment with double-curved surfaces in several designs for bridges and large-span halls. By exploring the possibilities of form finding for these minimal surfaces, he sets his focus away from defined, calculable geometries and towards a simple definition of boundary conditions, from which a form is self-generated by the use of textile or soap film models. This methodical change towards a “form with no name” does not happen abruptly, but can be traced in several steps by the inversion of the relation between form and model. While early folded plate designs derive their form from a simplified linear bending beam model, the form idea of the arch-like surfaces of the Basento Bridge is measured directly from a physical model and then calculated afterwards. This new design approach does not only reflect the understanding of efficient structures as minimal forms but must also be seen as corresponding to the new understanding of plasticity and continuity of concrete.” 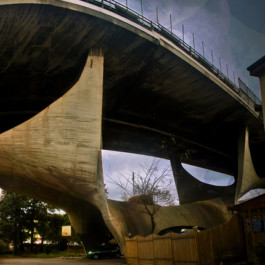 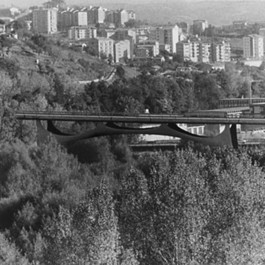 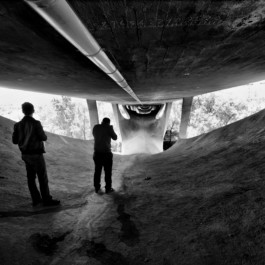 „The mathematical interaction between force and function led to the formation of the Sergio Musmeci Viaduct. The Basento Viaduct, a bridge built in 1969 in Potenza (Italy), is a continuous surface minimized in its area while maximizing its structural function. Sergio Musmeci managed to create a magnificent concrete surface whose aesthetics directly derived from its efficiency studied using analog models and form-finding techniques. The following video shows how this can be accomplished with the Kangaroo physics engine.“